Studying abroad in London for two months was going to be the highlight of my summer. I could not wait to travel to different cities in Europe every weekend with some of my closest friends, touring amazing sites, and eating some of the best foods. As soon as I stepped off my eight-hour flight, I had one thing on my mind; London was my new home and I was going to make every second count!

What was not on my mind was how I planned on staying safe during my time abroad. In my past travels I have been to riskier locations like Colombia, South America and Tanzania, Africa and did not think that I would have to worry about how safe London would be. 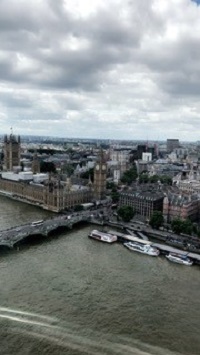 Two nights after my arrival, three members of ISIS ran through crowds in a van on London Bridge and continued to Borough Market to stab innocent  victims. Luckily I was safe in my dorm room across town, but some of my friends had been in the area just hours before and were unable to find any available taxis or Ubers to get them home safely. They ended up having to buy a hotel room for the night and wait until the next day. Moments later, my phone began to buzz with concerned family members back home and all I could think about was how I planned on staying safe after such a traumatic event happened in my short time in London. Even though an event like that can never be prepared for, I knew there were certain ways to avoid compromising situations.

From then on, I made sure I was always aware of my surroundings. At times I would realize my nose was buried in my phone and I was not paying attention while I was walking around. I had been warned about moped snatchers and pick-pocketers who specifically target people who are not paying attention, and quickly began to keep my head up at all times. I began to feel safer just by acting confident and being mindful of my surroundings. Being a young woman in a large city also can attract attention. One evening after work while riding on the tube, I noticed the man sitting across from me becoming more agitated and intrusive. He began to inch further out of his seat and closer to me, mumbling odd things about me. I avoided eye contact and ignored him, but remained calm even though I was extremely uncomfortable. Even though the next stop wasn’t my time to get off, I quickly got out of my seat and changed cars. Being able to react quickly yet confidently is key to avoiding unwanted situations.

As an intern at beTravelwise, a Travel Safety Training company, I have picked up on several tips like these that can help ensure safe travel. Simple things like keeping a door wedge for added security while staying in hotels and making sure your room number is not announced aloud has helped me feel secure during my travels. My time in London has been a memorable experience and I am so thankful that I was able to work with a company that is so concerned with travel safety. Students who plan on studying abroad in the future should keep in mind the nine following tips:

1. Always be aware of your surroundings- keeping your head up and taking notice of what is going on around you is key.

2. Don’t be too trusting- not everyone is your friend and has your best interests in mind.

3. Drink responsibly- don’t consume so much alcohol to the point where you lose control. Never leave a drink unattended.

4. Spend extra money on being safe- calling an Uber and staying at your location until it arrives is better than taking the tube late at night.

5. Try to blend in- take notice of how locals behave and act accordingly. Don’t be overly obnoxious and attract attention to yourself.

6. Trust your instincts- if something doesn’t feel right, it probably isn’t!

7. Have a travel buddy- traveling alone attracts attention and staying in a group can help keep you safe.

8. Keep family and friends updated- always inform others where you plan on going/what you plan on doing. Make sure your phone is always charged!

9. Keep copies of your travel documents and never leave your belongings unattended.